By Ingrid Srinath, the founding Director of the Centre for Social Impact and Philanthropy at the Ashoka University and a member of the WINGS board. The views expressed here are her own and do not reflect those of the University or WINGS. 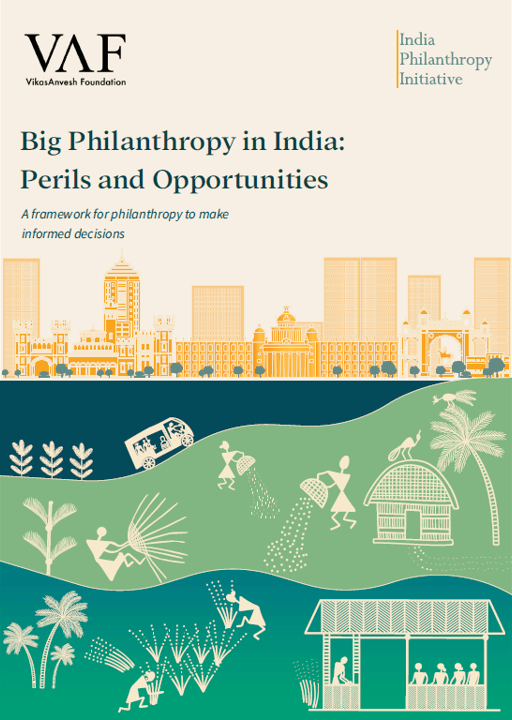 Despite its long and storied history, philanthropy in India has been subject to very little study. The Big Philanthropy in India: Perils and Opportunities report by Vikas Anvesh Foundation for the India Philanthropy Initiative is a welcome first step towards public reflection by the sector. Focusing on the personal philanthropy of Ultra High Net Worth Individuals, it does not include corporate giving or Corporate Social Responsibility.

The report calls out the absolute lack of reliable data on philanthropy by India’s burgeoning class of billionaires. This gap prevents the accurate estimation of the scale, composition, growth or contribution of the philanthropic sector. It hinders decision-making and prevents the optimal allocation of resources. With the sparsely resourced ecosystem, it also hampers the sector from having a well-defined identity and voice. The report’s call for both greater transparency and for the creation of a support ecosystem that’s fit for purpose is, therefore, very welcome.

While the stupendous response to Covid-19 from every quarter – big philanthropy, business, civil society and citizens of every walk of life – has been universally lauded, less has been said about the fact that, in India, this response was slower, less efficient and less effective than it might have been with better data and better networks.

The report’s focus on risk, the typology of risk it proposes, and the emphasis on the need to design for risk, manage it and mitigate it rather than avoid it is also very heartening. Risk is, of course, the source of legitimacy for big philanthropy as the only provider of patient, long-term risk and innovation capital. India, as the report recognises, is still at a stage of philanthropic evolution where all philanthropy is seen as a pure, untainted good. Given the scale of need in India, and the nascency of this new wave of philanthropy fuelled by wealth acquired in the past three decades, and the lack of any significant incentives for philanthropy this is, perhaps, to be expected.

The report seems to accept as a fait accompli the stance by most Indian philanthropists that extending support to causes that may be looked upon unfavourably by the government poses risks that are best avoided. It appears to classify “good” and “bad” activism in a manner not dissimilar to the language adopted by authoritarian governments. In doing so it does civil society a disservice failing to recognise that much, if not most, of the national scale social change India has seen since independence in 1947 — from the movement to restore democracy during the 1975 Emergency when democracy was suspended by then Prime Minister Indira Gandhi, to the movements for women’s rights, the rights of marginalised communities, as well as the rights to information, education, food and work — has been achieved by grassroots movements despite the lack of philanthropic support, not because of it.

The eerie silence of Indian philanthropy and philanthropists in the face of the ongoing assault on constitutional values and democratic freedoms and growing restrictions on civil society is perhaps understandable given the very real consequences such advocacy can evoke. Well-wishers of Indian philanthropy, however, could more seriously address the question of how these constraints might be overcome rather than simply accepting them as a given. The current consensus among India’s philanthropists, highlighted by the report, around a model that assumes partnership with government as the preferred pathway to scale, also merits re-examination in this context. More debate is certainly warranted on the pros and cons of this model including the risk of philanthropy crowding out government rather than crowding it in as a catalyst of change rather than a service delivery mechanism.

“Philanthropy is commendable but it must not cause the philanthropist to overlook the circumstances of economic injustice which make philanthropy necessary,” wrote Martin Luther King Jr. This existential dilemma at the heart of philanthropy must provoke greater soul-searching in India where philanthropists have been the beneficiaries of the vastly unequal society being created. Nowhere was this more on display than during the present pandemic, which presents all Indians, but business and philanthropy in particular, with the opportunity to reimagine not just the public health system and the digital divide, as the report points out, but also education, labour law, urban governance, public housing and many other domains.

The report lists some of the lessons learned during Covid-19, but perhaps could have gone beyond the ‘what’ to the ‘how’ of philanthropy. Around the world, and to a lesser degree in India, donors reached out to grantee partners to understand their needs and to extend support by providing more flexibility, reducing application and reporting requirements and extending timelines for utilisation and reporting. Many learned from that experience that operating on the basis of trust has significant benefits and considerably lower costs. Research by the Centre for Social Impact and Philanthropy (CSIP) among NGOs in India found that Indian grant-makers were significantly less likely than international foundations to have adopted these practices. Many NGOs were still waiting to hear from their funders in July what the future might hold, cutting salaries, downsizing staffing, and watching their bank balances disappear even as the needs of their communities soared. Some narrated grim stories of having to subject beneficiaries to indignities such as posing for photographs with relief material and biometric identity cards to satisfy donor requirements. At CSIP’s Resilience Strategies for Nonprofits programme, also in July, it was clear that the organisations with the deepest roots in their communities, those with the highest levels of autonomy at the frontlines and those that had been able to build strong institutions were the ones that were the most agile, relevant and effective in their response.

Ensuring that such learning is widely accessible to philanthropists in India and beyond requires strengthening of the ecosystem to co-create the knowledge, networks, norms, and narratives to which the sector aspires. As Indian philanthropy gains momentum and scale, the time to do so could not be more opportune. The trajectory in other countries has shown that the alternative is to wait for a scam or scandal to discredit the sector provoking action by regulators.

Big philanthropy in India could go a long way in learning from their partners and global peers to lead by example on the values they practice – from the representativeness of their governance and decision-making structures to setting the standards for accountability and transparency, and, most of all by living the humility sought by India’s most generous big philanthropist, Azim Premji, in his introduction to this timely report.

Or
If you have linked your account to one of the following social networks, please click on the relevant icon to log in
Not a member yet?
Register